Could Prime really flip the #1 player in the country??

NastyD said:
You better claim it while blowing smoke

That's hella'. JSU is on cloud nine this week mane. Pending CB victory, #1 recruit + too many others.... #growth.

That's hella'. JSU is on cloud nine this week mane. Pending CB victory, #1 recruit + too many others.... #growth.
Click to expand...

Yea we are riding a wave right now. Don't y'all go announcing y'all coach and steal our thunder. Wait until Monday dammit lol

Suck a fat one john cummins!

Polecat561 said:
Unless we get our own version of Coach Prime, we will not be able to pull something like this off. Just saying....No disrespect to any coach or coaches, but they don't have the "name" or background that Sanders does. Hell, most D1 coach don't neither....
Click to expand...

What a time to be alive. Congrats JSU.

See.. these fools are clueless. Sometimes it doesn't take a school to flip a player. It takes a damn good coach.

This is so exciting! Great for Jackson State and HBCUs (trickle down)

Bewildered said:
Coach Ray Lewis of PVAMU, you TOO are on the clock, although unofficially!

I think Ray is the most phony cat alive

but hey, if y'all can get him, do it!!! I think he'd bring energy and work ethic to any program. Dynamic speaker too.

the band fan said:
Strahan is the only one who can do it if he wants and his money is longer - but coaching isn't in his future unfortunately
Click to expand...

Strahan name aint nowhere as "sexy" as Deion Sanders.... Deions whole persona is what makes him... Strahan dont have that.
M

I saw what you did there!!

Mace said:
I saw what you did there!!

funkie junkie said:
Who's gonna take a stab at it??
Click to expand...

"Eye Of The Tiger"

Now can we go beat their asses... That's when the shat really get's fun(nny).

Some folks are absolutely outraged about this and I love it. Hope this starts to happen more often!
M

Travis Hunter's HBCU jump may not signal sea change, but college football is better for it​

Travis Hunter, the No. 1 high school player in America, flipped his college commitment from Florida State to FCS-level Jackson State on Wednesday.
It was the most stunning college football recruiting decision in decades. No one turns down the richest and most successful programs in the country to sign with an HBCU. Well, they didn’t until now. And it may not take long before decisions like this, while still uncommon, aren’t that uncommon.

Hunter is a dynamic, 6-foot-1, defensive back/wide receiver from Suwanee, Georgia, in the Atlanta suburbs. He could have attended any school in the country.

Yet he chose to go play for Jackson State in part because of Tigers head coach Deion Sanders, in part because he wanted to attend a Historically Black University and, in part, because this made a whole lot of business sense.

This is the first recruiting class that profit off name, image and likeness and maybe no one played this game better than Hunter. The speculation of what was committed to him reached into the seven figures, although what is real and realized remains to be seen. (Is he going to be in AFLAC commercials with his coach?)

What is undeniable is that Hunter made himself a massive star and cultural hero Wednesday and thus set the standard for players to rethink what NIL can do for them. 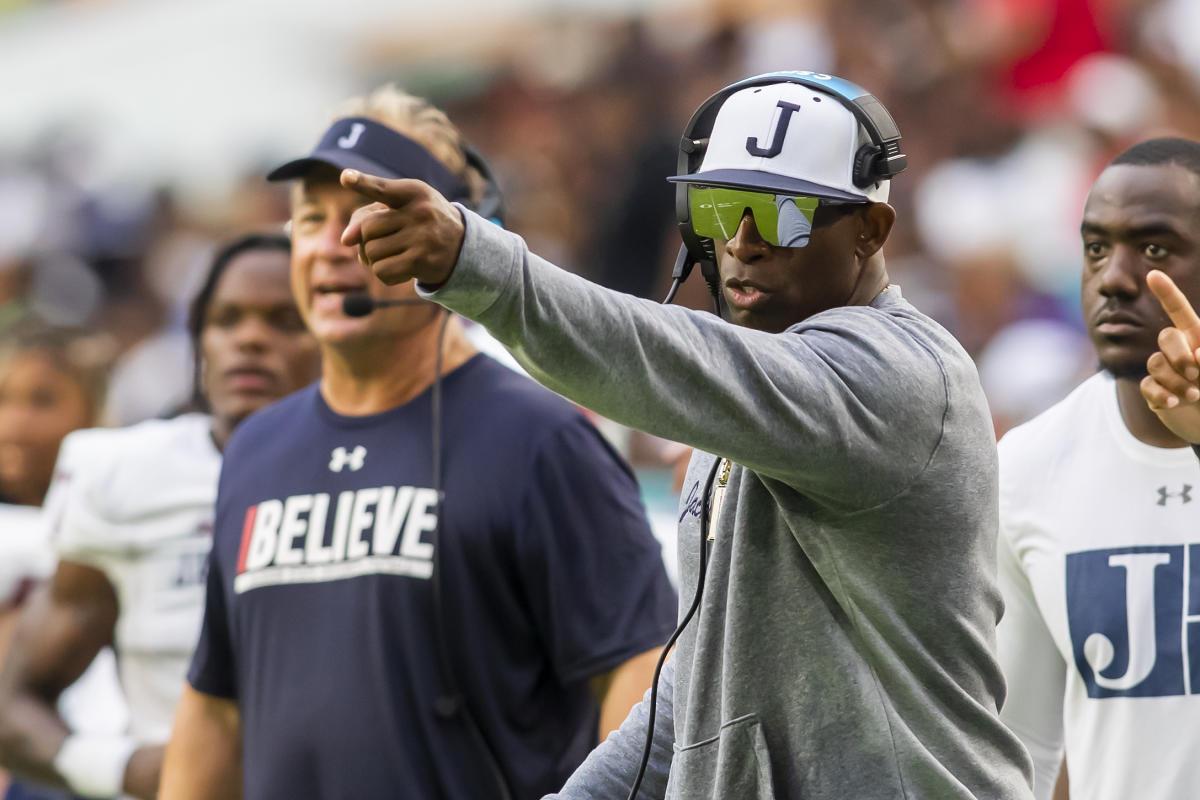 Travis Hunter's HBCU jump may not signal sea change, but college football is better for it

It isn't always about signing with a name-brand school, or being another star on a star-studded roster. Hunter showed that with his stunning flip from Florida State to Deion Sanders and Jackson State. 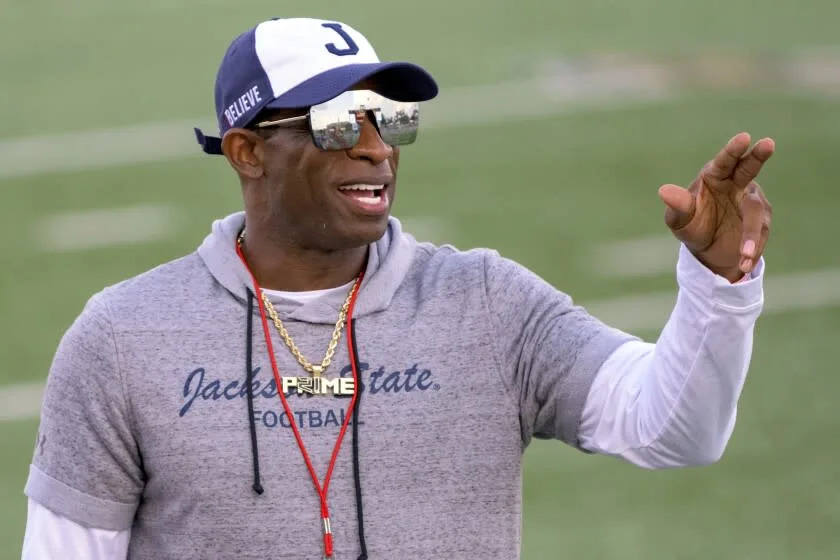 Hours before the start of the early national signing period, Deion Sanders made a prediction.
"We're going to shock the nation," the Jackson State coach told Barstool Sports on Tuesday night.
He was correct. Coach Prime snagged the top recruit in the country.
-From his own alma mater.

Suwanee (Ga.) Collins Hill High cornerback Travis Hunter, ranked the nation's No. 1 recruit by 247Sports.com, committed to Florida State in March 2020. But during his announcement ceremony Wednesday morning, Hunter tossed aside a Seminoles cap, as well as hats for Auburn and Georgia, then caught a Jackson State cap that had been thrown to him and placed it on his head.

Hunter later posted on Twitter to explain his decision to flip from Florida State — which plays in the NCAA's Football Bowl Subdivision and has
won three national titles, most recently in 2013 — to Jackson State — a historically Black college that plays in the lower tier Football Championship Subdivision. 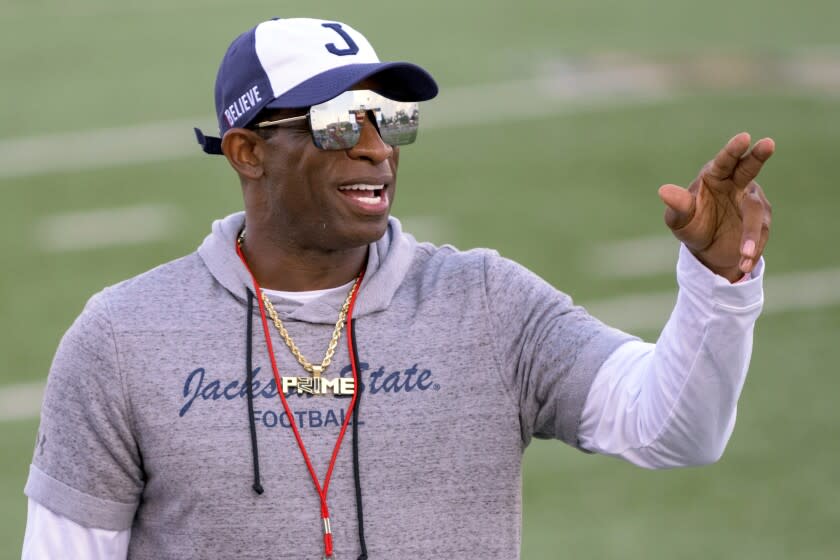 Jackson State coach Deion Sanders promised to 'shock the nation' on signing day. And he did, snagging No. 1 recruit Travis Hunter from Florida State.

Got dam! In Thee I believe! That's what I'm talking about.

This was genius, now more eyes will be on the celebration bowl due to Jackson states recent commitments
T

DAHILL said:
Strahan name aint nowhere as "sexy" as Deion Sanders.... Deions whole persona is what makes him... Strahan dont have that.
Click to expand...

Strahan is the long game and can set you up down the road better - why is #SMAC entertainment always tagged on Sanders' post?

the band fan said:
Strahan is the long game and can set you up down the road better - why is #SMAC entertainment always tagged on Sanders' post?
Click to expand...

Because he’s a client!

What are they saying on Any giving Sunday.

I bet those necks red as hell over there.